In order to understand the impact of the people that own the media we access, we must find out who “owns” and “controls” our media. A couple of examples include:

Rupert Murdoch – “controls a media empire that includes cable channel Fox News, The Times of London and The Wall Street Journal.” (Forbes, 2019). At just 22, he was passed down a newspaper once owned by his father. He has a conservative standpoint that he spreads through these media outlets. However, he did urge Mike Bloomberg to run against Trump for the Presidency.

Bruce Gordon – Gorden owns WIN Corporation, and through this is also the owner of WIN television. Additionally, he holds a substantial stake in the media company Nine Entertainment Co.

Kerry Stokes – is the chairman of the largest broadcast corp in Australia: Seven Network. He is also a business mogul in other media sources such as electronic and print media, as well as other outlets like mining and property. 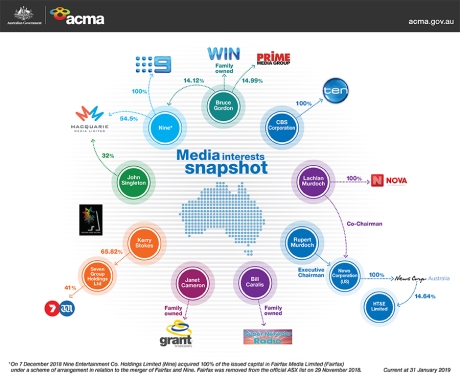 It is an important factor in media to understand who owns the news, as this determines the type of content and the position we hear when it comes to certain views. We have rules in place that determine how much a person can own. An example would include the two-to-a-market radio rule, which prevents control of more than two commercial radio licences in the same licence area. Preventing someone owning multiple media sources is a positive thing because bias has a big impact in the way we look at certain issues, whether it be in politics, laws and views on the world.

To find more information on who owns what in Australia, head over to the Australian Communication and Media Authority website: https://www.acma.gov.au/theACMA/media-interests-snapshot

Personally, I do not 100% trust our news sources, because as I have stated before, bias is a big issue that will always be a problem no matter what view it has. Rupert Murdoch owns the Australian Newspaper, and due to his opinion on Global Warming, there were never any articles that explored the danger it possesses, but only that it is a “hoax.” The basic opinion of someone with a lot of power over the media has a large scale influence on our country and the individuals in every day life that consume this kind of media.